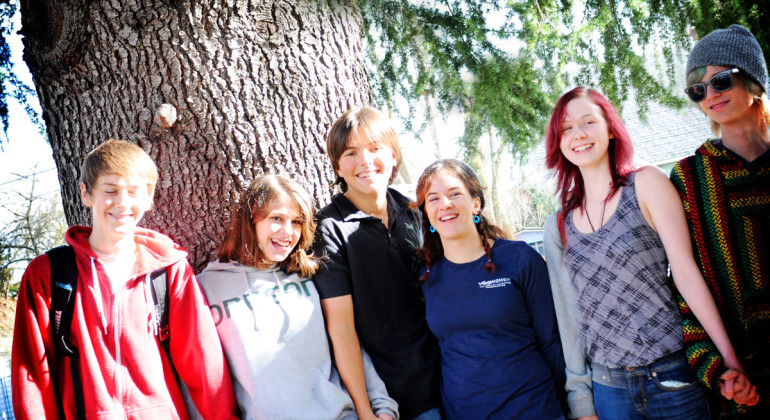 NYU – Tisch School of the Arts

More and more frequently, VH learners are opting to by-pass or delay college. Often, their passions lead them directly to a career path, or, they opt to take a “gap year” to explore the world and define their interests before plunging into the financial and academic commitment of college.

Choosing a path to a job or career is a very individual journey and process. Each person’s goal will vary, and every person’s path will be different.

Ben was involved at Village for four years, in Choices, classes and Destination Imagination. An avid filmmaker, he wove film production into learning whenever possible, and even got to help film Class Dismissed. He volunteered at OMSI, studied digital music production, math and Spanish, and kept making his videos. Through Village he got involved with Revolution Parkour and became their official videographer.

Ben’s first professional album is released under the name Oregonmi. He’s been hired as Media Meister for LearnTech Labs in the Bay Area. He’s responsible for all media; video, photography and much of the company’s internet presence. Ben has worked several years as a TA with Digital Media Academy in filmmaking, special effects, electronic music production, and robotics.

Learning outside the classroom has allowed Ben to develop his ideal mix of mentors and experiences.  At Village, Ben felt great happiness and encouragement to be fully himself. He maintains a love of learning and insatiable curiosity that lead him daily to new explorations, deeper levels of understanding in all he pursues, and unbounded opportunity.

The youngest Fitzgerald, Tylise, attended Village Home for 8 years.  Her passions were art, science, and robotics. After competing in robotics for 8 years as a robot designer, she started college is studying mechanical engineering.

After leaving elementary school, David Thomas attended Village Home for 6 years through his middle and high school years. Village Home provided the whole family with a wonderful community, and interesting and varied classes taught by passionate teachers. David most enjoyed the experience and camaraderie of being on robotics and Destination Imagination teams throughout his time at Village Home. At 16 he began to transition from Village Home classes to taking classes at Portland Community College. He took all his core freshman courses at PCC and was able to transfer as a sophomore to Portland State University to study Computer Engineering. His passion is music–playing guitar, bass, keyboards, and any other instrument that strikes his fancy–and he plays in a band that performs shows around Portland.

Claren Walker grew up at Village Home. Although her mom, the founder of Village Home, originally had great ideas for schooling her at home, she ended up getting all of her education at Village Home. Without any homework, and with all of the freedom she experienced in Village Home classes, she wondered if she was “learning everything”, but apparently she should not have worried. With the foundation she got in Village Home classes, Claren started augmenting her Village Home classes with Portland Community College classes when she was 16. Even though she had never been in an environment with grade accountability, she earned a 4.0 in her PCC college-level classes, as well as an excellent score on her SAT.  Claren remained active in the Village Home community as a member of  the Village Home state-championship Mock Trial team, a member of the Model United Nations group, and continued her involvement in the VH drama program while taking calsses at PCC.  At age 18, Claren entered the University of Oregon honors program on a full-ride, Presidential scholarship.

Ben started attending Village Home at age 8 and completed his time there at age 18. During his time at Village Home he was a Student Representative on the Board of Directors, an Ambassador for the Model United Nations Team, and a Captain of the Mock Trial Team. Ben has stayed involved with the Village Home community; he has worked as an assistant coach for the Mock Trial team, which won the Oregon State Championship and competed at the national championship in Raleigh, NC. Ben also has been attending Portland Community College, where he hopes to finish all prerequisites before transferring to a 4 year university. Additionally, he has been working and saving his money for travel to Europe and possibly South America. Ben Wood enjoyed his time at Village Home tremendously as it gave him opportunities he wouldn’t have had in a traditional homeschool environment, and, more importantly, it allowed him to meet some of his closest friends whom he still sees today.