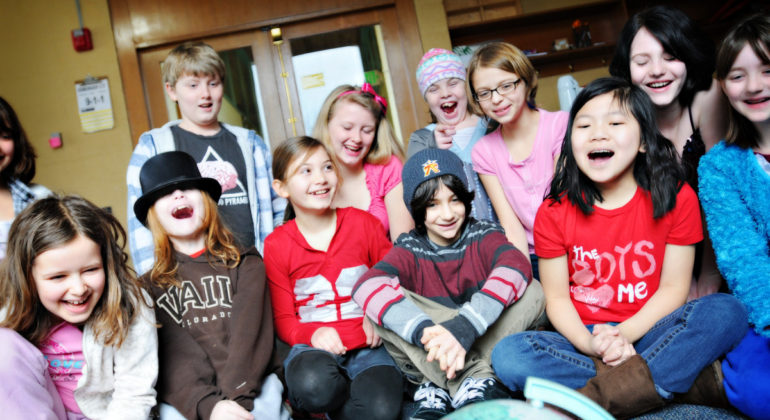 Village Home began in 2002 with a group of homeschooling parents led by Lori McKee Walker, who were interested in creating community for their children. They were happily homeschooling with a vision for MORE:

But they also had overstuffed calendars, and so were also happily homeschooling with a vision for LESS:

After months of researching and planning, Village Home incorporated, organized, and began offering tuition-free classes in Fall 2003 as an enhanced alternative to public education, with 200 Portland-area homeschoolers enrolled.

Village Home strengthens (academically) and complements (socially) family-centered learning by offering an affordable community aspect to homeschooling and by offering expert-enriched group educational opportunities across fields that include mathematics, sciences, the arts, technology, and many other specific areas of study.

Initially, Village Home was established in partnership with the Beaverton School District, and for the first two years of operation, Village Home partnered with area school districts to provide supplementary education for homeschoolers. In the second year, because of the resounding success of the program, Village Home had earned service contracts from four other area districts: Portland, Hillsboro, Forest Grove, and Tigard, and served students from several other districts on a transfer basis.

During that time, Village Home offered approximately 80 classes weekly, and 130 field trips per year for homeschooled students age 5-18, tuition-free. The program grew consistently and steadily, and enjoyed success as learners thrived. By the end of year two, enrollment reached 258, a 22% increase in the first two years. A highlight of the second year was sending the science bowl team to national competition.

By the end of year two, it became clear that political climate changes and increasing district budgetary pressure was leading to increased control over the program, including requirements from districts to perform standardized testing, and to require students to engage in a full, standardized curriculum, despite the fact that Village Home was, by contractual definition with the districts, a supplementary program designed to enhance home-based learning. Both requirements are antithetical to what Village Home values about effective education.

In the Summer of 2005, Village Home re-organized as a tuition-based, private program designed with significant member benefits, and with an optional member commitment to contribute volunteer time. The organizational structure was completely revamped, although course offerings remained similar. Taking some aspects of co-op organizations, and some aspects of private-tuition programs and schools, Village Home created an innovative hybrid program designed to enhance learning in a community setting while affording families and the learners maximum flexibility. In 2005-06, Village Home successfully piloted a private-school option called CHOICES.

During the first year with private-funding, Village Home successfully retained over 50% of its population, a testament to the quality of the program, considering families (generally with one income) were for the first time paying out-of-pocket for services that were previously gratis. Village Home also gained many new families who had not attended previously simply because Village Home was funded by the public system, and hence, tied to it’s requirements. During the 2007-2008 academic year, Village Home served an average of 170 students with approximately 70 weekly course offerings.

Since that time, Village Home has continued to grow and thrive, and has added numerous programs to continue to serve homeschool, charter school, and other independent learners. Village Home added tutoring, homeschool testing, travel programs, and Rivers Day Program to it’s offerings while also expanding support to the homeschool community through our annual Parent Enrichment Series.  To keep costs lower by streamlining overhead, Village Home reorganized it’s tuition model from a member model to a pay-as-you-go model while still remaining committed to keeping tuition low. Each year, Village Home awards financial aid both in the form of cash aid as well as by offering volunteer opportunities that result in tuition discounts.

Each year, Village Home has been honored to be associated with learners who are actively pursuing their dreams. Since 2002, we can boast quite a bit about our learners and their accomplishments. Village Home learners have: won the regional Science Bowl and competed nationally, won several notable Chess matches, competed successfully in annually Lego and Destination Imagination competitions (with a 3rd place win in 2014 at DI Globals), and taken home first place in Art Contests of various shapes and sizes. A number of Village Home students perform regularly in professional theater and dance productions. We have had Spelling Bee, GeoBee, and History Bee competitors win and represent Village Home regionally and nationally. Most recently one of Village Home’s three Mock Trial teams won the Oregon State Championship and competed at Nationals in NC. We have many learners pursuing their dreams at Village Home, and getting accolades for their efforts. Village Home alumni have been accepted into prestigious colleges and universities around the world including MIT, Harvard, Stanford, and Oxford.

As a private program, Village Home is free to explore the outer bounds of what makes a learning community vibrant, meaningful, and effective for our families while providing educational opportunities that are fun and engaging. Village Home continues to be inspired by self-directed, intrinsically motivated learners, and remains responsive to community needs. Although the parents are honored as the primary educator for their children, Village Home serves the family to make the homeschooling journey easier and more enjoyable.  Over the years, Village Home has had the opportunity to more clearly define its path, and its place in the education reform movement.